Take a look at your favorite succulent type. Yeah, that’s a good plant. They’re reliable, respectful, patient, and honestly don’t ask for too much. If you’re busy, they can wait. If you’re having a bad day, they’re right by your side.

Now, what if I told you that you could have a plant with all the positive attributes of succulents AND it could bloom? Yup, it’s possible! There are many species of flowering succulents that produce various beautiful flowers given the right conditions.

First, let’s give you a refresher on what exactly succulents are. Yes, they’re spiny, have thick leaves, and are mesmerizing when you look at them, but what sets them apart from other plants?

Succulents, by definition, are drought-resistant plants that store water in fleshy leaves, stems, or roots. They have adapted to survive in arid, dry environments, which is why they don’t die when you forget to water them for two weeks.

It’s interesting to note that the succulent category includes cacti; however, not all cacti types are succulents. This is because cacti are identified by areoles, small bumps that grow the iconic cactus spines.

Succulents can be found on every continent other than Antarctica but are most abundant in Africa. They are typically in dry areas because they can survive with little or no water for long periods of time. You can rarely find them in the driest areas (like deserts) because, as low-growing plants, they can be easily covered by sand. 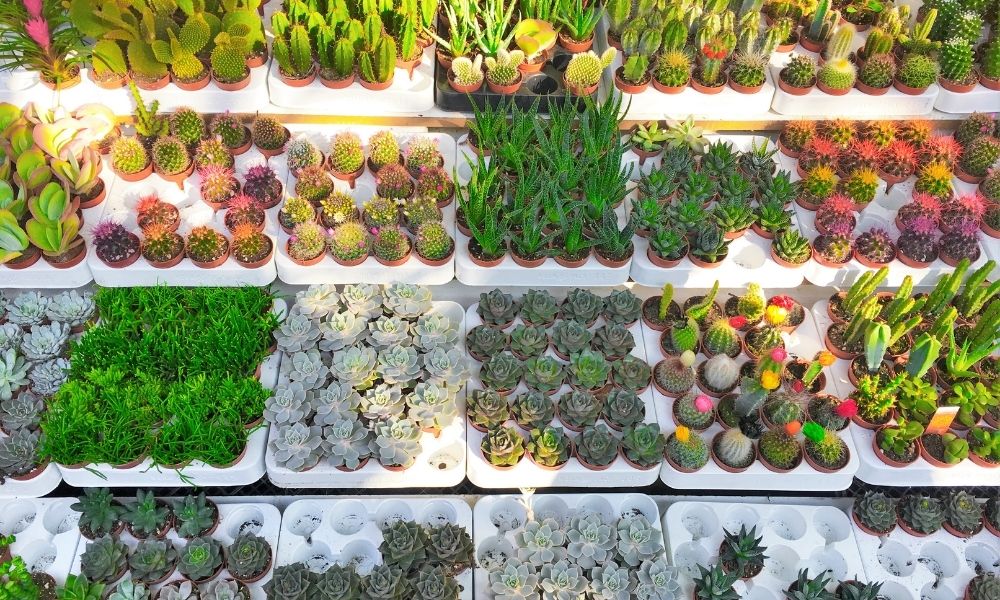 Do All Succulents Flower?

Nope, not all succulents flower, but most actually do. I know this might come as a surprise (I see you eyeballing the succulent on your desk that you’ve had for three years), but given time and the right conditions, your succulent could potentially bloom.

Flowering conditions vary from plant to plant. The closer the conditions mimic their natural habitat, the more likely they are to bloom. However, it takes four to six years for most succulents to have their first bloom.

At the same time, there’s a handful of succulents that flower consistently every year (or multiple times a year), even when they are young. And other succulents don’t bloom at all; it really all depends on the type of succulent and the conditions.

When Do Succulents Flower?

Succulents can flower in any season, but most often, they bloom in spring or summer. Aloe Vera typically blooms in summer, but they have also been known to bloom in other seasons – even autumn or winter. Crassula succulents, like the popular jade plant, bloom in winter.

The Most Popular Flowering Succulents 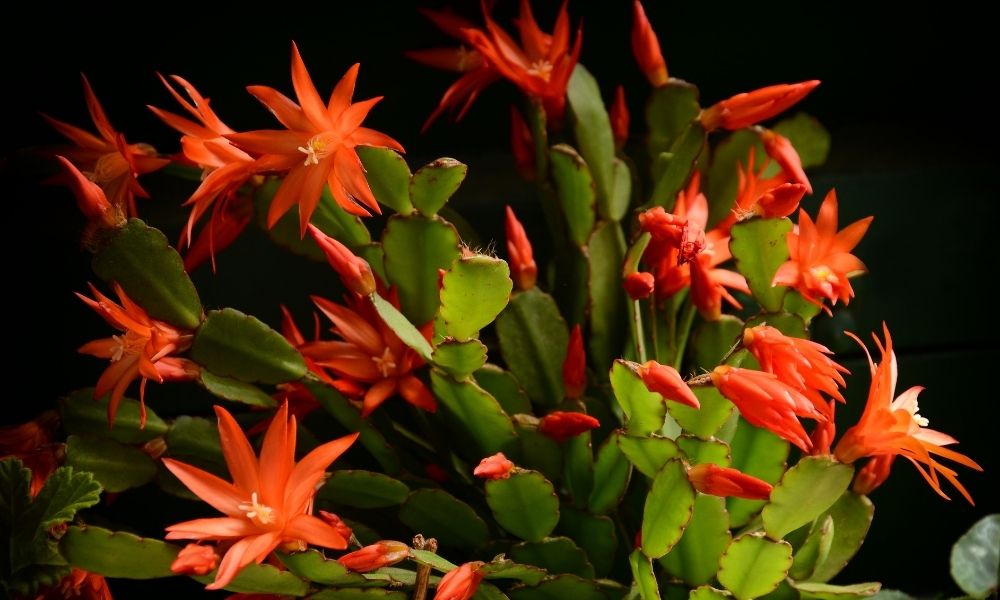 Christmas cactus is a succulent known for its flowers. If you really want a flowering succulent, this is the one to get because it can bloom several times a year (even indoors). They need a bit more water than other succulents, but if you take care of it, it’ll reward you with beautiful white, red, and sometimes yellow flowers.

As the name suggests, the leaves of this succulent look like round bulbs connected by long, thin stems, making it a popular choice for hanging baskets. But it’s more than interesting foliage; given it has well-draining soil, plenty of sun, and the right amount of water (less is more), it’ll bloom numerous small, fuzzy flowers.

This is one of the few flowering succulents that can bloom successfully indoors. The stem may look intimidating, but the classic oval leaves and cute pink flowers make up for it. It requires minimal care, but unlike other succulents, it will very likely give you that much sought-after bloom.

Carrion flowers have some of the most unique flowers in the world. Its red and yellow patterned flowers look other-worldly and almost like works of abstract art. They’re certainly attention-grabbing, but before you go out and get one, a word of warning: the flowers emit a carrion smell (yes, rotting flesh) to attract flies, so they might be better as an outdoor succulent.

The ice plant is a popular flowering succulent because its flowers look similar to daisies. The small, thick leaves quickly form layers and spread out, making this a good plant for ground cover. Also, the colors! The flowers come in a variety of colors: pink, purple, white, and yellow, to name a few.

The jade plant is already one of the most popular succulents, but did you know that it can bloom? If your jade plant is indoors, flowering might take some work; but put it outside, and the previously shy flowers might just show themselves. The small star-shaped flowers are either white or pink, and the sight of them blanketing the dark green leaves of the jade plant is totally worth the effort. 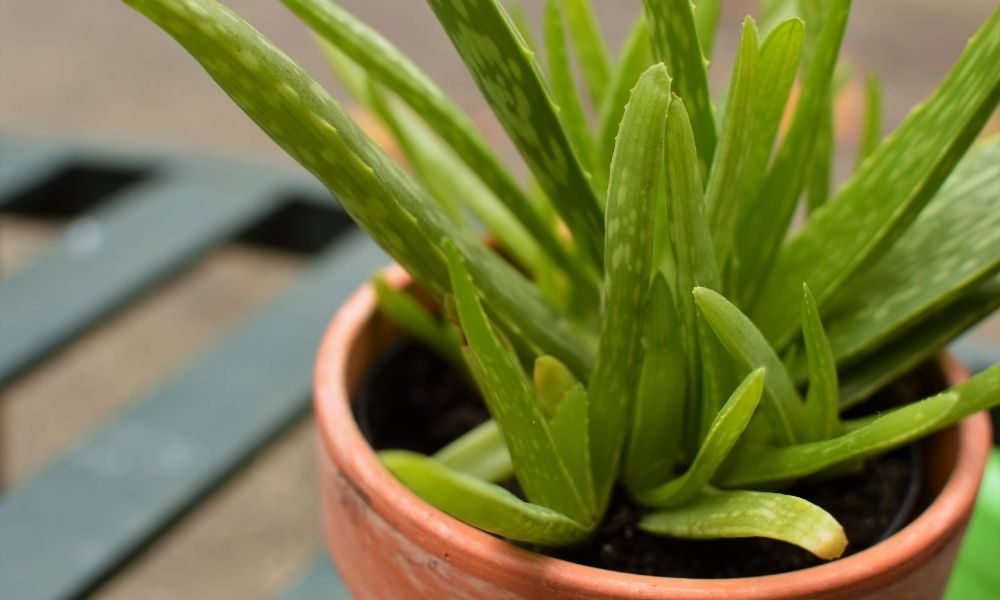 The Aloe genus of plants, including the popular Aloe Vera, are not only iconic succulents but produce beautiful upright red or orange flowers. They usually need sunny outdoor conditions to flower, but when they do, the alluring flowers can’t be missed.

This is an interesting flowering succulent because it’s monocarpic, meaning it only blooms once and then dies soon afterward. But don’t worry – as the name implies – this main succulent (hen) produces many offset children (chicks) every year, so when one dies, the others still survive. The appearance of the charming white flowers might indicate the end, but in a way, it symbolizes the beautiful circle of life.

This is an easy-to-grow cactus that blooms charming pink flowers all over its round surface. As you can probably guess, this makes it look like a cute decorative pincushion. But don’t mistake it for one because what you think is a cushion is actually a cluster of hooked cactus spines.

This trailing succulent has leaves shaped like beans on long, thin purple stems. The thick leaves are usually green but can turn red when exposed to the sun. It’s an eye-catching succulent in its own right, but what really sets it apart is the contrasting yellow flowers that bloom during any season.

Are Flowering Succulents Easy to Care For?

In general, flowering succulents require a little more effort when compared to your everyday indoor succulent. This is because succulents bloom in optimal conditions; a little too much water, the wrong kind of soil, or not enough sun, and the succulent may not bloom. However, some succulents, like the Christmas cactus or crown of thorns, require minimal plant care and will still bloom.

Should You Cut the Flowers Off Succulents?

Some succulents (including flowering succulents) are toxic to pets. If you have a curious pet that often chews on plants, make sure to double-check whether your succulents could potentially make them sick. Just a few of the succulents you should keep away from pets are aloe, euphorbia, jade plant, and Christmas cactus.

You can have your pie and eat it too (referring to succulents!). You can have a drought-resistant, easy-maintenance plant that looks cool and produces flowers.

Most succulents can produce flowers, but for some, it’s easier than others. Even your trusty succulent – you know, the one sitting on your coffee table – can bloom. This might mean putting them outside or closely monitoring their water intake; but it’s worth it because when you see those little flower buds appear, you know your succulent is thriving and not just surviving.